A screening just for kids at the Halle Tony Garnier 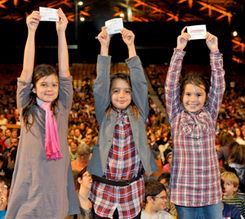 Created in 2010, at this event, kids, parents, and recreational and cultural center, can attend a special screening on a giant screen at the Halle Tony Garnier in the afternoon of Wednesday, October 16. A snack is served to the kids at the end of the movie.

In partnership with the children's program  "Wednesdays in Lyon."

For more information, contact the pedagogical service of the Institut Lumière at
aliebl@institut-lumiere.org

• The beginnings of Chaplin

The Immigrant, The Cure, The Pawn Shop, The Adventurer  by Charles Chaplin (1916-1917, 1:42)
Chaplin plays a young alcoholic European immigrant arriving in New York at a peaceful resort
spa; an employee in a thrift store; a prison escapee who saves a mother and daughter from drowning. Chaplin created the character of the Tramp for films with a fast-paced and irresistible humor. To see with the family!
Pathé Bellecour Thu. 1:30pm | Saint-Genis-Laval Sat. 8:30pm | Institut Lumière Theater 2 Sun. 2:30pm

The festival once again partners up with Les Toiles Enchantées, the association created by Gisèle Tsobanian and chaired by Alain Chabat, whose purpose is to organize screenings in pediatric hospitals and specialized establishments for sick or disabled children and teenagers.

The festival will propose the screening of a film at the Women and Children’s Hospital in Bron on Wednesday afternoon, at the same time as other children are discovering the film at the Halle Tony Garnier. The film will be presented by one of the guests of the festival.

With the support of BNP Paribas.