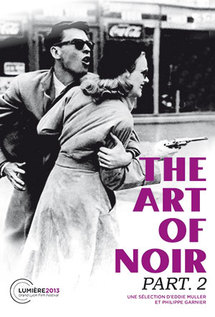 After a first session in 2009, Eddie Muller, president of the Film Noir Foundation in San Francisco, and the writer-historian Philippe Garnier are back to present their unearthed treasures. Rarities that
you are not likely to see elsewhere! With the world premiere of the restored print by Warner,
Gun Crazy / Deadly is the Female, in the presence of its starring actress, Peggy Cummins.

Gun Crazy/Deadly is the Female  by Joseph H. Lewis (1950, 1:26)
An ace with a revolver (John Dall) and a showwoman shooting champion (Peggy Cummins) combine their skills to rob banks. A mythical and unknown thriller, an ode to crazy love and rebellion, a film that represents marginality in a standardized America.
Institut Lumière Tue. 9:45pm | CNP Wed. 6pm | Bron Sat. 4:30pm

The Sound of Fury/Try and Get Me!  by Cy Endfield (1950, 1:25)
A former soldier who fails to adapt to civilian life is dragged into a bad situation by a friend. A film that reflects the specific social despair of the time. Starring a diabolical Lloyd Bridges, with a desperate and tragic Frank Lovejoy.
Institut Lumière Wed. 9:45pm

The Hunted  by Jack Bernhard (1948, 1:28)
A woman on parole has sworn vengeance against a policeman, also her former lover, who wrongfully put her in jail. Watch out for Olympic figure skater Belita, «the ice queen» of film noir.
Institut Lumière Thu. 9:30am

Crashout  by Lewis R. Foster (1955, 1:29)
Six fugitives get together after their escape from prison in the hope of recovering buried loot. An unparalleled festival of henchmen.
Institut Lumière Fri. 7pm

High Tide  by John Reinhardt (1947, 1:12)
Two men trapped in a car after an accident look back on how they got there: a drunk and frustrated femme fatale, a naive inspector, the mixture of social classes, and above all, a fanciful fatalism.
Institut Lumière Tue. 9:30am

Chicago Calling  by John Reinhardt (1952, 1:15)
An unemployed photographer goes home in the morning after a drinking binge; his wife and daughter leave him. A heartbreaking and thrilling odyssey with Dan Duryea through the streets of downtown LA, as the man tries to save his family.
Institut Lumière Sat. 9:15am